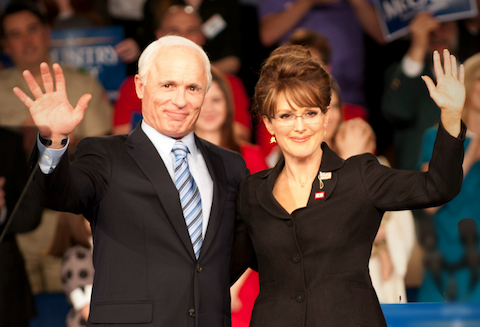 HBO is preparing to release a television film on the 2008 ascent of then-Alaska Gov. Sarah Palin that seems sure to reopen the wounds of that lost campaign and reignite controversy over Palin’s fitness for office and the wisdom of putting her on the ticket.

“Game Change,” based on the 2010 book of the same name by two journalists, is set to premiere on HBO March 10.

Former John McCain campaign aides depicted in the movie, including Steve Schmidt, the campaign’s chief strategist, vouched for its accuracy in interviews with The LA Times this week.

“Game Change” shows Palin, portrayed by Julianne Moore, thrust on to the international stage, only for her handlers to belatedly discover the huge gaps in her knowledge of the world — ignorant of the Federal Reserve System, mistakenly believing Saddam Hussein ordered the 9/11 attacks against the United States and unaware that the prime minister, and not Queen Elizabeth II, ran the British government.

Schmidt and a chief Palin ’08 aide, Nicolle Wallace, said they found it highly credible. Wallace said the film “captured the spirit and emotion of the campaign.”

HBO noted the depth of research behind the movie and said in a statement: “HBO has a long track record of producing fact-based dramas, and our mantra has always been, ‘get the story right.’ We hope that people will withhold any judgment until they have viewed the film.”

The Palin camp’s response was: “Game Change” was based on a “false narrative.”

“This was a surreal experience for me,” Schmidt said of the movie, in which he is played by actor Woody Harrelson. “Ten weeks of the campaign are condensed into a two-hour movie. But it tells the truth of the campaign. That is the story of what happened.”

Since McCain’s loss, the longtime Republican strategist has gradually been revealing more of his feelings about the lost election. The film vindicates the view he and many others around McCain had: the “high-risk, high-reward” choice of Palin, which Schmidt pushed for, had been a terrible mistake.

“My judgment was influenced by an ambition for victory, trying to figure out a way to win the race,” Schmidt said from his Lake Tahoe home. “There is no question she helped to energize the campaign and to catapult John McCain into the lead. But the result was the nomination of someone who was fundamentally not qualified to be in the national command authority. That supersedes any short-term or long-term political advantage. Obviously, I have great regret over that.”

Schmidt and most of the other top operatives from the McCain campaign gave extended interviews to John Heilemann and Mark Halperin, the book authors. Many of the same sources also spoke to Danny Strong, writer of the film, and to director Jay Roach.

One jarring revelation in which the movie reaches beyond the book comes when Schmidt makes a query to assess nominee Palin’s awareness of foreign affairs, asking McCain’s VP pick how she would respond in the White House to news of waning British support for the war in Iraq.

The Palin character, sitting opposite Schmidt in a campaign bus, says McCain would “continue to have an open dialogue” with the queen of England on the subject. Flabbergasted, the Schmidt character informs her the queen is not the head of government. Palin asks who is. He informs her that the country has a prime minister.

Strong said he uncovered that additional episode during the 25 interviews he conducted with principals from Team McCain. Schmidt confirmed the account.