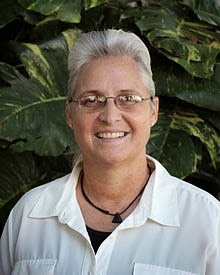 Hawaii state Rep. Jo Jordan (D) may be the first openly lesbian legislator to vote AGAINST marriage equality ever.

During the second reading vote of the marriage equality bill currently before the Hawaii state House, Jordan voted ‘no’ on the legislation.

Jordan has explained that she came into the debate as “undecided” even though 75% of her district supports marriage equality.  Jordan says she feels that she has to represent “the whole state” with her vote.  While not technically correct – her job is to represent her own district – she still misses the mark as polls show 55% support for the bill across the state.

Jordan says she was swayed by the five days of testimony coming largely from opponents of the bill who flooded the House in an attempted “citizens filibuster” to run out the clock on the current special session.

Jordan has one final opportunity to vote for marriage equality during the third reading vote on Friday.