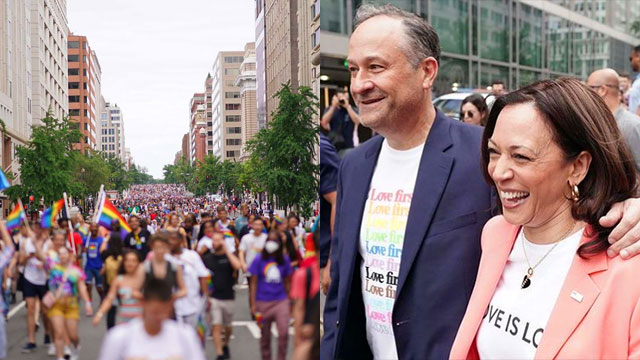 Vice President Kamala Harris and Second Gentleman Doug Emhoff made a surprise appearance at the Capital Pride Walk in Washington, D.C. on Saturday.

Harris’s participation made her the first sitting vice president to march in an LGBTQ Pride parade.

Harris’s appearance came as a surprise, and the crowd around her cheered, according to a White House press pool report. She and Emhoff marched for about a block down 13th Street, waving and wishing onlookers “Happy Pride,” and stopped to speak to participants and spectators for about 10 minutes.

Harris called for passage of the Equality Act, a comprehensive LGBTQ+ civil rights bill that has been approved by the U.S. House of Representatives but has yet to come to a vote in the Senate.

“We still have so much to do,” she added, according to the pool report. “We celebrate all the accomplishments. Finally marriage is the law of the land. We need to make sure that our transgender community are all protected. … There is so much more work to do and I know we are committed.”

Harris and Emhoff were dressed appropriately for the event, Washington’s NBC affiliate reports. She wore a pink blazer and a T-shirt printed with the words “Love Is Love,” while he wore a T-shirt with “Love First” in rainbow letters.

.@VP Kamala Harris makes a stop at the @CapitalPrideDC walk and rally. pic.twitter.com/anD2A7HIgS

The @VP and @SecondGentleman are on the move at Capital Pride 🌈 pic.twitter.com/F27RxDaoHJ

After stopping by the DC Pride parade the @VP & @SecondGentleman bumped into a bride & groom, and some adorable kids on this beautiful Saturday afternoon! pic.twitter.com/M6R5GcgDXS

VP Kamala Harris joined LGBTQ+ pride marchers in D.C. and called for the passage of the #EqualityAct. “There is so much more work to do, and I know we are committed.” https://t.co/IH0E8iOMgY pic.twitter.com/U8ZuBUZ3Bu