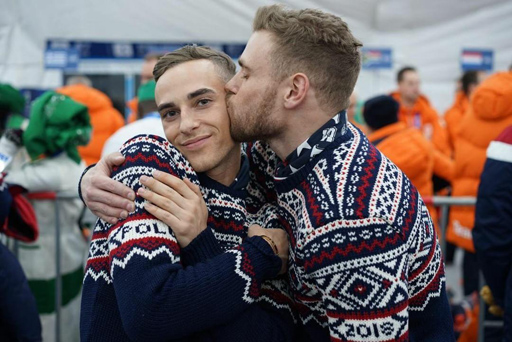 Out Olympians Adam Rippon and Gus Kenworthy have been entertaining their fans with their awesome bromance since the beginning of the 2018 Winter Olympics.

Since then, the dynamic duo have exchanged lots of clever and sly repartee in interviews and photo shoots, all to our delight.

This past weekend, though, Kenworthy took things to a new level as he debuted his Halloween costume which he labeled, “Adam Rippoff,” riffing on Rippon’s now-famous Academy Awards outfit complete with leather harness.

In concocting the photo, you may notice Kenworthy also replaced the Oscar statue in the background for something a bit more comical.

Rippon, never at a loss for a quick retort, replied in his own inimitable manner tweeting, “We finally did each other [eggplant]”

We finally did each other

Kenworthy continued the exchange with his own “admission” that he’s “wanted to do” Rippon since they met:

tbh I’ve been wanting to do you since we met…

Rippon, forever comfortable with a quip, replied with a simple, “Feels right:”