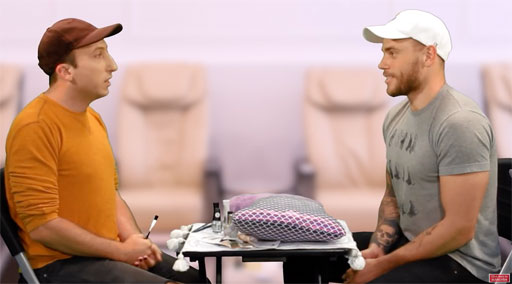 Olympic skier Gus Kenworthy sat for an “interview via manicure” with comedian Michael Henry in this episode of Henry’s new series, Nailed.

To pass the time during the manicure, Henry inquires about a whole host of subjects in Kenworthy’s life like being an outdoorsy person, if he has openly farted in public, how he’d feel about someone rifling through his rubbish, being haunted by Henry’s pervy ghost, if he enjoys slapping folks in the face, Spam, if he would choose erections over solid food for a week, being an Alpha, and more.

Henry’s quirky humor lands as always, and Kenworthy shows a talent for taking part in the witty repartee.