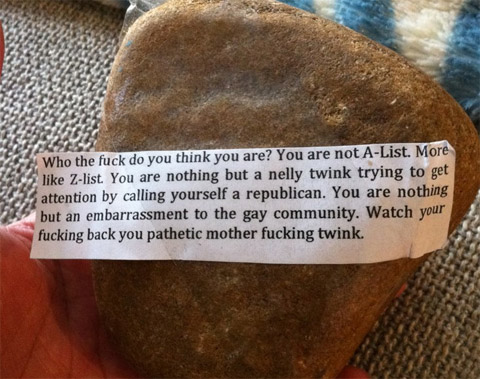 Late last week, Taylor Garrett, a reality show participant in LOGO’s A-List: Dallas – who describes himself on Twitter as “Republican. Christian. Honest.” – tweeted a photo of a rock with a note on it and claimed that he was the victim of an anti-GOP attack by someone defending the gay community.

The tweet came following LOGO’s decision to feature Republican pundit Ann Coulter in a guest spot on the show.

Many in the blogosphere noted that LOGO executive producer John Hill shortly thereafter tweeted congratulations to Garrett for “making headlines” with his claim. Soon thereafter, both Taylor Garrett’s initial tweet about the incident AND John Hill’s congratulatory tweet were deleted.

It’s also been noted that no police report was made in Dallas, nor was any interview given to any of the press, gay or otherwise, in Dallas. This has attempted many to wonder if the entire incident was part of a publicity stunt to create attention for the upcoming TV show.

“When I questioned Hill as to whether he’d played a role in the stunt, his tweet to Garrett was instantly deleted.”

“  Neither Hill nor Logo have yet responded to my questions. I understand all too well that gay people are not above the depths of scumbaggery typically associated with producing reality television, but a false hate crime claim is truly beyond the pale. At the very least, Logo and the show’s producers should address what some are (hopefully wrongly) thinking.”

Now, it’s possible that IF the attack were not true, that may be good reason not to file a false police report. That is a crime, you know. It’s also not what you’d describe as “honest.”

What do you think? Real attack or “reality show” activity?