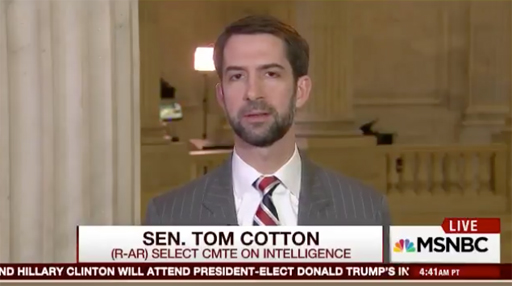 This morning, President-elect Donald Trump sent out this tweet which many interpreted as Trump believing in fugitive Julian Assange than the U.S. intelligence analysts:

Julian Assange said “a 14 year old could have hacked Podesta” – why was DNC so careless? Also said Russians did not give him the info!

And yesterday, Trump seemed to ding the intelligence community for “needing more time to build a case” regarding the Russian cyber-hacking during the presidential election. Note how Trump puts “Intelligence” in quotes…

Today, Sen. Tom Cotton appeared on MSNBC’s “Morning Joe” saying he had more trust in the country’s intelligence community than in WikiLeaks Founder Julian Assange. “I have a lot more faith in our intelligence officers serving around the world, very smart and experienced analysts that we have here in the nation’s capital, than I do in people like Julian Assange. I can tell you that much.”

This morning I discussed #Russia on @MSNBC @Morning_Joe. WATCH: pic.twitter.com/DtAx4RDvv4

It seems so very odd for an American president-elect to choose the word of a fugitive on the run like Assange who trades in stealing information in a covert manner over the unanimous position of all 17 intelligence organizations of the United States.