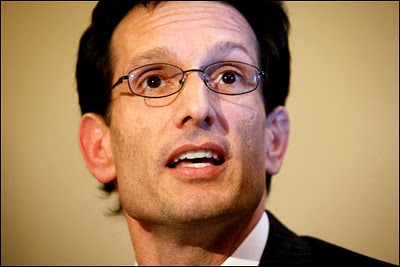 In response to President Obama and the Justice Department’s decision to stop defending the unconstitutional Defense of Marriage Act in court, House Republicans are now saying they are looking to have a plan in place by late this week to defend the law themselves.

House Speaker John Boehner said in an interview Monday that the GOP led House may appoint a special counsel to defend the law in the Justice Department’s absence.

House Majority Leader Eric Cantor said “Again I do believe that this is a case that is distinguishable on its merits and to have the administration take the position, the president take the position, that he’s not defending the law of the land, is something very troubling I think to most members of the House.”

In a case of irony and double-speak, Rep. Boehner’s original response last week was to question the President for addressing the anti-gay law instead of focusing on job creation: “While Americans want Washington to focus on creating jobs and cutting spending, the President will have to explain why he thinks now is the appropriate time to stir up a controversial issue that sharply divides the nation.”

Now however, Mr. Boehner and Mr. Cantor seem to have decided that they will put their focus on anti-gay policy instead of the ongoing economic issues facing the country.

During the last election, Republicans stated over and over again that job creation would be their driving focus and goal. However, since taking over the majority of the House, it seems the Republicans have done everything BUT focus on jobs. They have tried to repeal health care reform, change abortion laws and roll back regulations on the safety of food in the US – just about everything BUT job creation.

Mr. Boehner. Mr. Cantor – why are you addressing everything but job creation?