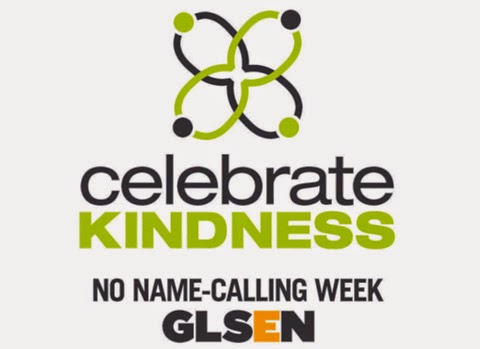 From the Gay, Lesbian, Straight Education Network (GLSEN): Be one of the brave, and join us in celebrating No Name-Calling Week January 19-23, 2015.

Whether you’re a teacher, student, guidance counselor, coach, librarian or bus driver, show you care by organizing a week of activities at your school aimed at ending name-calling once and for all.

No Name-Calling Week was inspired by the popular young adult novel entitled The Misfits by popular author James Howe.

The book tells the story of four best friends trying to survive the seventh grade in the face of all too frequent taunts based on their weight, height, intelligence, and sexual orientation/gender expression.

The friends create a new political party during student council elections and run on a platform aimed at wiping out name-calling of all kinds. The No-Name Party in the end, wins the support of the school’s principal for their cause and their idea for a “No Name-Calling Day” at school.