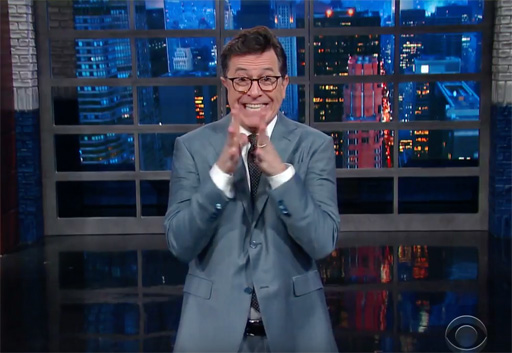 Stephen Colbert is over the moon that President Trump called the late night talk show host out for being “a no-talent guy” with “bad ratings” who uses “filthy language” during the president’s interview with NBC’s Lester Holt.

Just a bit from Colbert’s monologue:

“I do occasionally use adult language. And I do it in public, instead of the privacy of an Access Hollywood bus…”

“You know who has really bad ratings these days? You do. Terrible approval numbers. I hear they’re talking about switching your time slot with Mike Pence.”

“Since all of my success is because of you, there’s an obvious way to take me down. Resign.”

Watch the glee below.