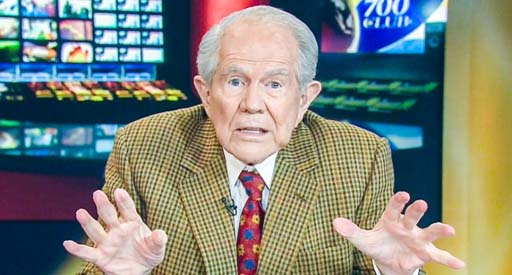 Robertson is infamous for calling for so-called “religious exemptions” to push a dangerous anti-LGBTQ agenda, accusing LGBTQ people of deliberately spreading HIV and AIDS, supporting so-called “conversion therapy,” and comparing the LGBTQ community to Satanists as well as thieves, rapists, and murders.

“Today’s interview with anti-LGBTQ activist Pat Robertson should be the last straw for anyone leaving hope that President Trump would be an ally to LGBTQ people,” said Sarah Kate Ellis, President and CEO of GLAAD.

“Trump refused to speak out about LGBTQ Pride Month or against the atrocities facing gay men in Chechnya in favor of today using the office of the President to give credibility to a debunked TV personality with a long history of peddling vile inaccuracies and salacious insults that harm LGBTQ people. As anti-LGBTQ activists like Robertson get the red-carpet treatment at the White House, LGBTQ people must stay visible and fight back against all those seeking to erase our hard-fought progress.”

This week’s interview comes at the same time as Attorney General Jeff Sessions delivered remarks at a closed-door summit on “religious liberty” hosted by Alliance Defending Freedom (ADF). The ADF is labeled a hate group by the Southern Poverty Law Center and is currently representing Jack Phillips in the Masterpiece Cakeshop, Ltd. v. Colorado Civil Rights Commission case, which argues whether someone could use so-called “religious exemptions” to discriminate against LGBTQ people. The United States Supreme Court will hear oral arguments for the case later on this fall.

Hit the link above for several examples of Robertson’s anti-LGBT attacks over the years.