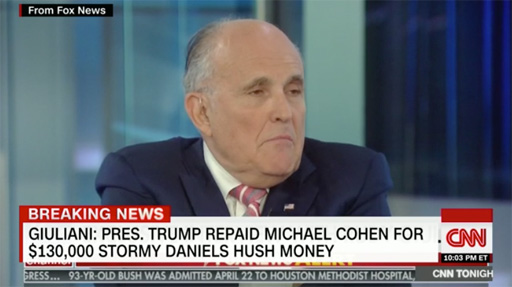 “Sorry, I’m giving you a fact now that you don’t know,” Giuliani continued, before saying that the payment was “funneled through a law firm, and then the president repaid it.”

The news directly contradicts Trump’s statements last month that he had no knowledge that Cohen had paid Daniels. Reporters aboard Air Force One had asked whether Trump knew about the payment, to which the president replied: “No.”

The Trumpster’s Twitter account attempted to address the issue today. Although, I’m thinking a lawyer wrote these tweets as they don’t have Trump’s signature caps-lock yelling and errant air-quotes.

Mr. Cohen, an attorney, received a monthly retainer, not from the campaign and having nothing to do with the campaign, from which he entered into, through reimbursement, a private contract between two parties, known as a non-disclosure agreement, or NDA. These agreements are…..

…very common among celebrities and people of wealth. In this case it is in full force and effect and will be used in Arbitration for damages against Ms. Clifford (Daniels). The agreement was used to stop the false and extortionist accusations made by her about an affair,……

…despite already having signed a detailed letter admitting that there was no affair. Prior to its violation by Ms. Clifford and her attorney, this was a private agreement. Money from the campaign, or campaign contributions, played no roll in this transaction.

The Twitterverse, of course, chimed in:

This is obvious, but still should be said: Giuliani’s reveal that Trump repaid Cohen $130,000 for hush money to Stormy Daniels renders the repeated denials to the American people from POTUS and his press secretary false and untrue.

1/2. We predicted months ago that it would be proven that the American people had been lied to as to the $130k payment and what Mr. Trump knew, when he knew it and what he did in connection with it. Every American, regardless of their politics, should be outraged…

2/2. …by what we have now learned. Mr. Trump stood on AF1 and blatantly lied. This followed the lies told by others close to him, including Mr. Cohen. This should never be acceptable in our America. We will not rest until justice is served. #basta