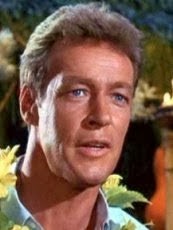 Russell Johnson, “the Professor” on Gilligan’s Island, has died at the age of 89.

Johnson, who played Professor Roy Hinkley, died of natural causes at his home in Washington.

Johnson was not in the original opening of the show. He and Mary Ann were referred to as “The rest.” But Bob Denver (“Gilligan”) insisted that they be included, and that happened later.

This year marks the 50th anniversary of the hit show about seven men and women stranded together on an island after their ship, the S.S. Minnow, wrecks during a storm.

According to the Washington Post, Johnson’s son, David, died of AIDS in 1994. Mr. Johnson became involved in fundraising work for AIDS research.

The only surviving members of the original cast are Mary Ann and Ginger, played by Tina Louise.