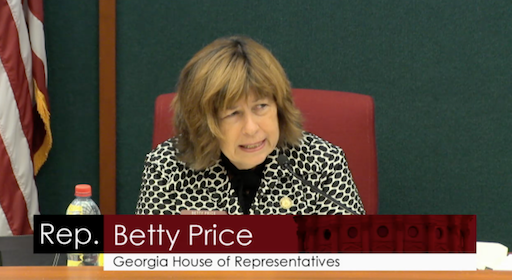 Betty Price, the wife of former Health Secretary Tom Price and currently a George state lawmaker, has come under fire for asking during a recent state House committee meeting if HIV+ folks should be quarantined.

Price also considered if the U.S. would be safer if positive people “died more readily.”

“It’s almost frightening, the number of people who are living that are carriers with the potential to spread,” Price said during a Georgia House of Representatives committee meeting on access to health care in the state (around the one-hour mark of the video). “Whereas in the past, they died more readily, and at that point they’re not posing a risk. So we’ve got a huge population posing a risk if they’re not in treatment.”

Price also said that while she didn’t necessarily want to quarantine people with HIV, that is exactly what she wants to do.

“I don’t want to say the quarantine word—but I guess I just said it,” Price said to Dr. Pascale Wortley, director of the Georgia Department of Public Health’s HIV epidemiology section, according to STAT News.

“Is there an ability, since I would guess that public dollars are expended heavily in prophylaxis and treatment of this condition, so we have a public interest in curtailing the spread. … Are there any methods legally that we could do that would curtail the spread?”

Georgia had the second highest number of HIV diagnoses in 2015.

You can watch the remarks on video here. Price’s comment comes at the one hour, two minute mark.

You’ll recall Price’s husband resigned from the Trump administration after spending over half a million dollars in private plane travel.