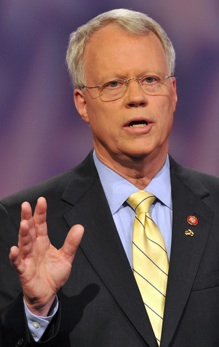 Rep. Paul Broun (R-GA) was asked at a town hall meeting Tuesday, “Who is going to shoot Obama?”

The question was met with laughter, and Broun did not immediately condemn it. Several eye witnesses say Broun laughed as well.

Broun said in response at the time: “The thing is, I know there’s a lot of frustration with this president. We’re going to have an election next year. Hopefully, we’ll elect somebody that’s going to be a conservative, limited-government president that will take a smaller, who will sign a bill to repeal and replace Obamacare.”

“Tuesday night at a town hall meeting in Oglethorpe County, Georgia an elderly man asked the abhorrent question, “Who’s going to shoot Obama?” I was stunned by the question and chose not to dignify it with a response; therefore, at that moment I moved on to the next person with a question. After the event, my office took action with the appropriate authorities.’

‘I deeply regret that this incident happened at all. Furthermore, I condemn all statements — made in sincerity or jest — that threaten or suggest the use of violence against the President of the United States or any other public official. Such rhetoric cannot and will not be tolerated.”

A law enforcement source confirmed that the Secret Service interviewed the constituent and determined that he now regrets making a bad joke.