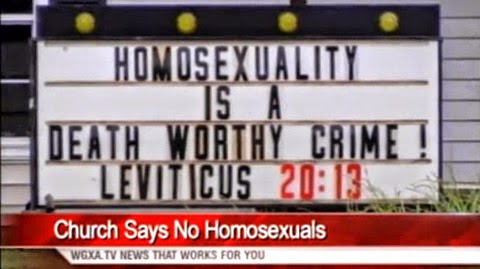 Robert Lee, the pastor of Ten Commandments Church in Milledgeville, Ga., recently changed the sign outside his church to read, “Homosexuality is a death worthy crime.”

Lee would seem to be calling for the death of homosexuals.

The sign references Leviticus 20:13, which reads, “If a man has sexual relations with a man as one does with a woman, both of them have done what is detestable. They are to be put to death; their blood will be on their own heads.”

Lee told WGXA that he hoped his sign would have an impact and said he would oppose a Supreme Court decision legalizing gay marriage.

“The institution of marriage was instituted by God and it should not be changed by people who deserve not to live,” he said.