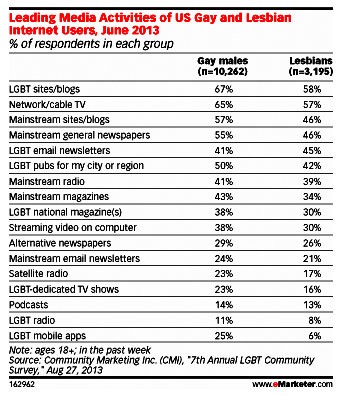 A Community Marketing Inc. (CMI) survey conducted in June 2013 found that a substantial proportion of gay males and lesbians in the US had engaged in a variety of media activities over the seven days prior to the survey. The most common activity among the men and women polled was visiting LGBT sites and blogs, at 67% of gays and 58% of lesbians. And when responding to a separate question, more than one-third of LGBT web users said they’d increased their visits to these sites in the past year. Network and cable TV came in as the second most popular media activity engaged in over the previous week, followed by mainstream sites and blogs.