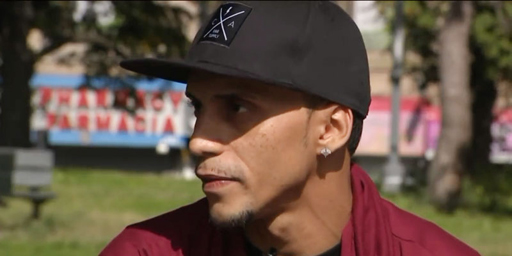 Last week, I reported on a racist tirade by a gay New Yorker aimed at his Lyft driver.

In the video, Ortiz is seen calling the police and announcing he won’t leave the car until he receives a refund for his $8.01 ride.

Ortiz’s new internet fame led to his dismissal from his job at a local health care clinic.

Now, he’s speaking to the local press saying he’s not a racist and he was just really, really drunk when he went off on Lettman.

“At the end of the day, my actions were unjustifiable,” Ortiz tells PIX11 News. “There’s nothing that I can say behind that to say ‘But this.’ I was drinking. A lot of the stuff that I said I didn’t even remember until the next day.”

“That’s not how I was raised to treat people.,” he continues. “I grew up in the projects, so I just wanna make sure that people understand that I’m not racist – I’m Puerto Rican, I’m from the Bronx, I’m gay.”

But he does still believe he and his friends were “treated differently” by Lettman.

“Like, we know discrimination, you smell it in the air,” he says. “You just know when someone’s uncomfortable with you.”

At this point Ortiz says he wants to move on from the sad debacle. “I just want to go on with my life. I’m not racist, my actions were completely wrong. I wouldn’t want anyone to speak to the way that I spoke to him.”

He concludes with a straight up apology: “The only thing that I can say is that I’m sorry.”

Watch the report from PIX11 News below.