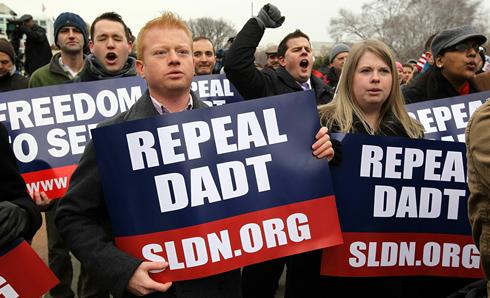 TIME Magazine has posted an essay by a gay soldier currently serving in our military.

He wrote about what it’s like to go through training regarding the repeal of “Don’t Ask, Don’t Tell.”

I held my composure as I stood in the back of a small but crowded room with standing room only. The formal briefing was a slightly awkward attempt at a conversation between one of my superior officers and the 40 or so of us squeezed in that room. He was clearly not used to talking about the topic of homosexuality as he seemed uneasy, but his overall message was a good one: “Soon you will be working around openly gay people. This change is akin to the integration of blacks into the military and the key to a successful transition is professionalism and mutual respect.”

As with any other conversation about gays in a setting where I am not “out,” I found myself reverting to old defense mechanisms. I tried to laugh, but not too hard. I listened intently while trying to look as if I was barely paying attention. I looked to see how everyone else was reacting only to mimic their posture, their level of attentiveness, and their own reactions to the conversation.

A good friend of mine, also gay, was standing next to me throughout the briefing. We barely looked at each other the entire time. His posture was much like mine, only he didn’t laugh. He didn’t smile. There was a cold emptiness in him which I had rarely seen before. I guess that was his way of not drawing attention to himself.

For an institution that prides itself on integrity and honesty, it’s a bit tough to read how self-aware some of our soldiers have had to learn to be to hide who they are just so they can serve the country they love.