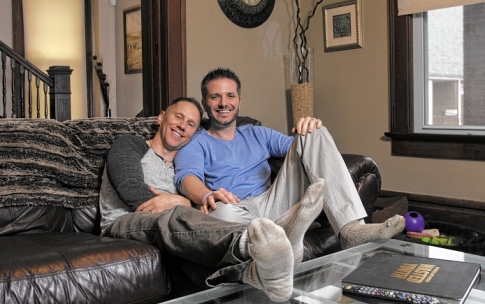 Army Capt. Stephen Hill says he wasn’t trying to score political points when he asked the Republican presidential candidates if they would reinstate the ban on gays serving openly in the U.S. military.

Now that “don’t ask, don’t tell” has been lifted, he needed to know if the military would take the next step and recognize his marriage, or if a new president would try to force soldiers like him back into the closet.

“I was looking forward to the future and hoping everybody would realize we are soldiers first, always,” said Hill, 41, an Army reservist who returned last week from his yearlong deployment. “I was hoping ‘don’t ask, don’t tell’ would be a distant memory for everybody.”

In a recent interview, Hill reflected publicly for the first time on his reasons for submitting the pre-recorded question for the Sept. 22 debate, as well as his reaction to the heckles heard around the world; the answer that former Sen. Rick Santorum gave to thunderous applause; and the outrage expressed on his behalf by, among others, his commander in chief.

This is what he asked: “In 2010, when I was deployed to Iraq, I had to lie about who I was because I’m a gay soldier and I didn’t want to lose my job. My question is, under one of your presidencies, do you intend to circumvent the progress that’s been made for gay and lesbian soldiers in the military?”

Santorum replied that he would reinstitute the ban on open service by gay troops because “any type of sexual activity has absolutely no place in the military.”

“What we are doing is playing social experimentation with our military right now. That’s tragic,” he continued. “Leave it alone. Keep it to yourself whether you are heterosexual or homosexual.”

“When the actual booing occurred, my gut dropped out, because my first inclination was, did I just do something wrong?” Hill said.

What Hill remembers most was that a presidential candidate defined his marriage and military service in terms of sex.

“This is not about sex,” Hill said. “A special privilege is not hiding pictures in my house or God forbid, taking mortar fire again and not knowing if Josh will be recognized. I’m fighting every day to protect everyone’s rights as human beings, and it seems counterintuitive for me to be fighting for those rights and not have them.”