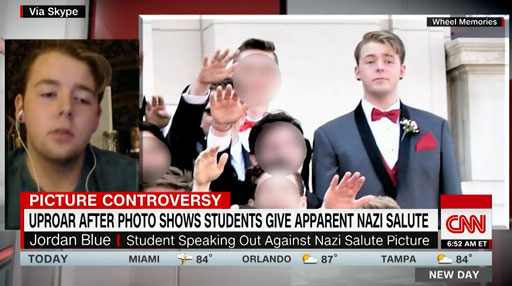 Yesterday, I reported on the prom photo that went viral from Baraboo school district in Wisconsin.

The photo showed about 30 male members of the Baraboo High School Class of 2019 giving the Nazi salute before their junior prom last spring. 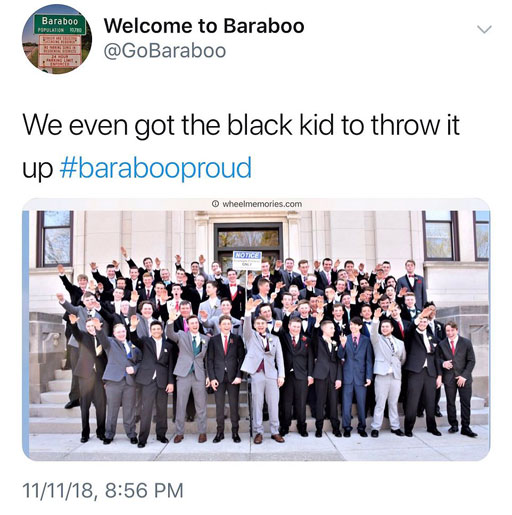 As I noted yesterday, one student was not having the moment.

Today, CBS This Morning spoke with the student, Jordan Blue.

Blue tells CBS News the photographer came up with the idea of telling the boys to “wave goodbye to their parents,” but didn’t specifically tell the boys to “raise your hand in a Nazi symbol way.”

But it’s telling that ‘raise you hand’ to these young men meant doing so in Nazi fashion.

Blue added that he felt his classmates did understand what the symbol represented, and that the moment was “scary” and “uncomfortable.”

Photographer Peter Gust has issued a statement which reads, “I didn’t tell them to salute anything… it was waving goodbye to their parents, having a good time.”

When asked why he didn’t participate, Blue tells CBS This Morning, “It did not represent my morals and I could not do something that I didn’t believe in.”

Blue admits making the gesture makes no sense to him, saying, “Some of these people have bright futures ahead of them, so why’d they do it?”

Speaking to CNN, Blue says if he’d known the direction the photo opp would go, he wouldn’t have taken part in the pics at all.

He also says that while the community is a ‘phenomenal’ place to live, people are “hurt and very distraught” over the scandal. And he makes a point to say the photo doesn’t represent Baraboo as a whole.

Blue, who came out as gay earlier this year on social media, shared with Vice reporter Jules Suzdaltsev yesterday that he’s been the target of bullying by these boys since middle school.

Suzdaltsev later tweeted that, after receiving more than 100 messages from students and parents from Baraboo High School, “nearly all of the stories echo the same basic theme: the community as a whole has a lot of casual & jokey racism, homophobia, and transphobia that is accepted as a part of life.”

“The school (and other schools in the area) do little to nothing to address these issues,” he added.

The American Defamation League reports the number of anti-semitic incidents in the U.S. rose 57% in 2017. That’s the largest single year increase on record.

I spoke with the only student who is visibly not comfortable with the “salute”, he provided this statement. pic.twitter.com/HbNBc8xLOK

it’s okay to be different ❤️