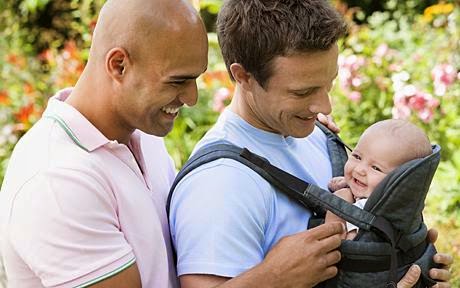 A new study on gay parents published in Proceedings of the National Academy of Sciences reveals brain activity that resembles both mothers and heterosexual fathers:

The 48 gay fathers raising children with their husbands seemed to be both mom and dad, brain-wise. Their emotional circuits were as active as those of mothers and the interpretive circuits showed the same extra activity as that of heterosexual fathers’.

Ideally, scientists would perform neuroimaging on men and women before and then after they became parents, to show definitely that any heightened activity followed junior’s arrival and was not present before. Until they can do that, Feldman said, she is confident that the telltale brain activity results from parenting.

One clue: in gay fathers, but not heterosexual ones, the brain also had extra communication lines between emotional and cognitive structures. The more time a man spent as primary caregiver, the greater the connectivity. It was as if playing both parental roles caused the brain to integrate the structures required for each.

“Fathers’ brains are very plastic,” Feldman said. “When there are two fathers, their brains must recruit both networks, the emotional and cognitive, for optimal parenting.”