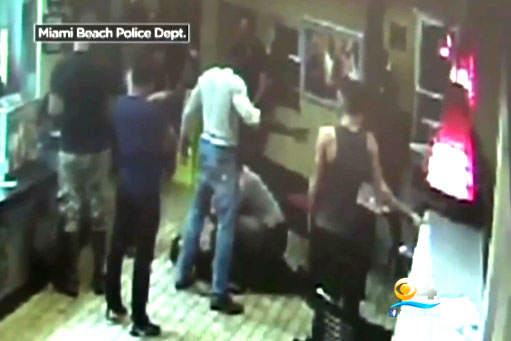 A casual kiss between two men at a Burger King in Miami Beach upset a customer so much he verbally attacked the men and then slammed one of them to the ground, beating him for over a minute.

From WSVN News in Miami:

A fight involving two people at a Miami Beach fast food restaurant may have been fueled by hate, said police. According to officials, two men were inside a Burger King Whopper Bar on Miami Beach when suddenly an attacker slammed one of them to the ground.

Police said the victim followed the attackers onto Washington Avenue, but the suspects got away. “Once we have the subjects in custody, and we present the case to the state attorney,” said Rodriguez, “we can determine at that point if they will add the hate crime element to this case, which would heighten the penalties.”

The couple has since returned home to California. The police department said an attack, especially one which may be based on sexual orientation, has no place on Miami Beach. “We want a clear message that we want any visitor, any resident here on Miami Beach, or I mean, Dade County for that matter as a whole, everyone is welcomed here and there’s no place for hate,” said Rodriguez.