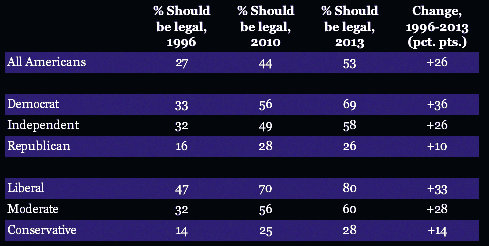 Gallup released the results of it’s latest poll concerning the support of marriage equality in the US.

Gallup’s May 2-7 poll suggests Americans’ support for gay marriage is
solidifying above the majority level.

Recently, Rhode Island and
Delaware legalized same-sex marriage, and Minnesota is likely to follow
suit. That would bring the total number of states legally recognizing
same-sex marriage to 12.

Just three years ago, support for gay marriage was 44%. The current
53% level of support is essentially double the 27% in Gallup’s initial
measurement on gay marriage, in 1996.

Read more on the poll here.