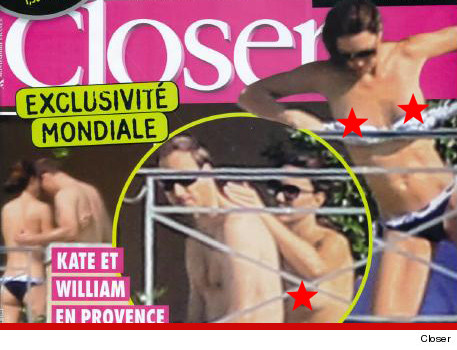 TMZ is reporting the French magazine Closer has published topless pics of Kate Middleton vacationing with husband Prince William at a secluded home in France.  The Royal Family is rightfully livid:

The pics — published by the French magazine Closer — show Kate taking off her bikini top while hanging out with William last week at a chateau owned by the Queen’s nephew, Lord Linley.

Moments after the pic went public, the Royal Family issued a scathing statement … saying “Their royal highnesses have been hugely saddened to learn that a French publication and a photographer have invaded their privacy in such a grotesque and totally unjustifiable manner.”

Clearly the Royals had every expectation of privacy. TMZ reminds us that it was the French paparazzi that chased Princess Diana into a fatal car accident.

Reports are the Royals are looking into legal action.