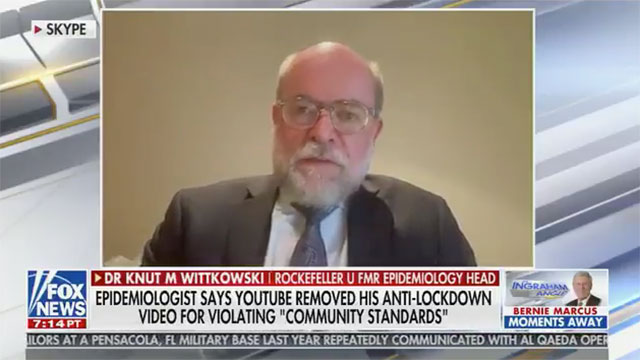 In case you don’t watch much Fox News, although a lot of people do, take a listen to recent guest Dr. Knut Wittkowski, an epidemiologist who told viewers Monday night that epidemics like the ongoing COVID-19 threat are usually over in around five weeks, we gain immunity and “we don’t have to think about it anymore.”

“Respiratory disease epidemics, and this is just one of those, they come and last about two weeks,” said Wittkowski during an appearance on “The Ingraham Angle.” “They peak, they go for about two weeks – in a large country it lasts a bit longer, in smaller countries a bit shorter. After three, four, five weeks the whole thing is over. We have immunity, we don’t have to think about it anymore.”

A renowned epidemiologist told the “The Ingraham Angle” on Monday that a video he posted on YouTube questioning the effectiveness of widespread lockdowns amid the coronavirus pandemic was removed for violating “community standards.”

Host Laura Ingraham noted that his video was viewed nearly 1.5 million times and asked Dr. Knut Wittkowski why he thinks “there is so much pushback to your line of thinking?”

“Because I think so many people have invested so much of their ego and so they have a problem acknowledging that maybe it was a little bit too much,” he said in response. “This in itself is restricting freedom of speech,” he continued.

In the YouTube video referenced above, Wittkowski declared, “With all respiratory diseases, the only thing that stops the disease is herd immunity. About 80% of the people need to have had contact with the virus, and the majority of them won’t even have recognized that they were infected.”

At this writing, that virus has killed 91,750 Americans. And that’s in two and a half months, which is a lot longer than ‘five weeks.’

Laura Ingraham guest says coronavirus is over, “we have immunity and we don’t have to think about it anymore” pic.twitter.com/8HsiRwQSqp