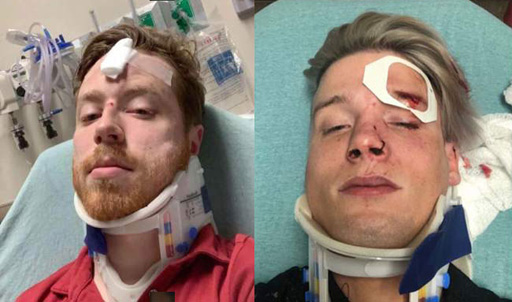 Four men have been arrested in connection with the brutal homophobic attack in downtown Austin last month that sent the two victims to the hospital.

According to NBC affiliate KXAN, the four suspects are:

According to KXAN, a second-degree aggravated assault charge, if convicted, could result in a prison sentence of two to 20 years. If a hate crime finding was successfully proven on top of that, the sentencing range would increase to five to 99 years in prison.

Officials say social media played a part in identifying some of the suspects by matching physical descriptions as well as tattoos, as well as surveillance footage from nearby buildings.

Additionally, a few days after the attack was reported, the police received a crime stoppers tip naming Frank Macias and another individual.

The victims, Spencer Deehring and Tristan Perry, told police they were walking down the street holding hands when a man called them a homophobic slur. When they asked what he had said, the man began calling them ‘faggots’ and called previously-unseen men who joined in the attack.

The four reportedly followed the couple taunting them with homophobic slurs.

When Perry attempted to verbally defend himself, he says he was punched by a muscular man with long, blond hair. Falling to the ground, the four joined in punching and kicking him.

When Deehring tried to defend Perry, they turned on him as well.

The attack ended when a passerby happened to see the assault.

Both men were transported to a hospital to be treated for serious injuries.

Deehring positively identified Macias in a police lineup. And according to reports, Macias then implicated his brother and the two other men.