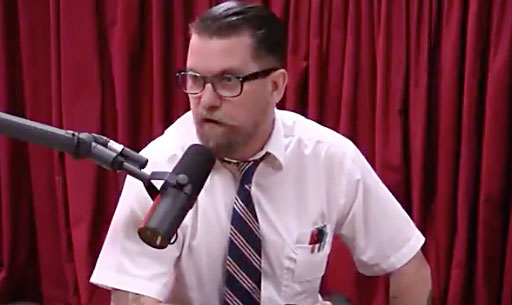 A group of Proud Boys, a homophobic, white nationalist group, took to the streets of Manhattan last Friday after attending a speech by the group’s founder, Gavin McInnes at the Metropolitan Republican Club.

Several members of the racist group (the Southern Poverty Law Center identifies the Proud Boys as a hate group) were captured on video after the event beating and kicking three individuals.

During the attack, one of the assailants can be heard yelling, “You’re not so brave now, faggot.” Another member of the group calls one of the victims “a f**king foreigner.”

In the aftermath, the New York Police Department, which had already arrested three of the protesters, has said it believes it can bring charges against nine Proud Boys who took part in the attack.

McInnes, though, took to his podcast on Sunday to defend the use of the word “faggot” by his followers.

As reported by Media Matters, McInnes says the incident began when a protester attempted to steal one of the Proud Boys’ MAGA hats.

“You know, someone jumps you, steals your hat and then gets beaten so bad that the kid, the antifa kid they beat up was in tears. He was crying. Now, while this person is crying, I’m sorry, but faggot is a handy term. It’s very rarely used against gays. In fact, Louis C.K. has this whole bit about how I would never call a gay a faggot because you don’t call homosexuals faggots, you call faggots faggots. It means someone — it means a man who is crying, basically. In fact, most gays I know are a lot tougher and more alpha than most straights.”

In an appearance on the conservative media outlet Newsmax, McInnes tried to say the word “faggot” is just a term used when hyped up in fist fight.

“When someone’s adrenaline is pumping, he’s going to say, ‘Are you brave now, f-word?’” McInnes said. “He didn’t mean it like it was some sort of homosexual attack.”

He also put the blame on the protesters, known as Antifa, for getting the Proud Boys so wound up that they had to use the word “faggot.”

Here’s more background on Gavin McInnes and his Proud Boys:

Please share this video. People need to understand how dangerous Gavin McInnes and his gang the Proud Boys are.

Notify his employers @CRTV and @FoxNews. Maybe we can prevent him from getting someone else killed. pic.twitter.com/zp0VBrmciR