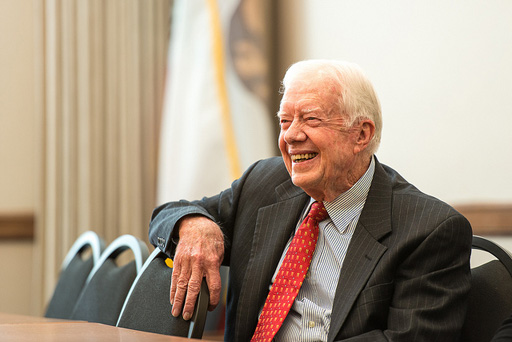 In a recent interview with HuffPost Live, former President Jimmy Carter shared he believes that Jesus would approve of same-sex marriage.

Promoting his book Faith: A Journey For All, Carter was asked by journalist Marc Lamont how his religious background aligns with the concept of marriage equality.

“That’s no problem with me,” he said. “I think everyone should have a right to get married regardless of their sex.”

The only conflict Carter says he holds regarding the issue would be if a church were forced to perform same-sex marriages which conflicted with that church’s teachings. This, of course, has never happened.

“But those two partners should be able to go to the local courthouse, or to a different church, and get married,” he added.

The 39th president did say abortion was a moral “problem” for him.

“I have a hard time believing that Jesus, for instance, would approve of abortions unless it was because of rape or incest or if the mother’s life was in danger.”

Carter admitted that while he has long held a conflict on the issue he ‘went along with that” because his “oath of office was to obey the Constitution and the laws of this country, as interpreted by the Supreme Court.”

Lamont pivoted back to the topic of marriage asking point-blank, “Would Jesus have approved of gay marriage?”

The 93-year-old didn’t hesitate in answering. “I believe he would,” Carter said. “I believe Jesus would. I don’t have any verse and scripture.”

“Jesus would encourage any love affair if it was honest and sincere, and was not damaging to anyone else,” he added. “And I don’t see that gay marriage damages anyone else.”

A longtime ally, Carter campaigned on the idea that “homosexuals should not be singled out for discrimination.”

After winning election, in 1977 Carter became the first sitting president to invite LGBTQ advocates to the White House.

He also shared in 2010 that he feels the United States is ready for an openly gay president.