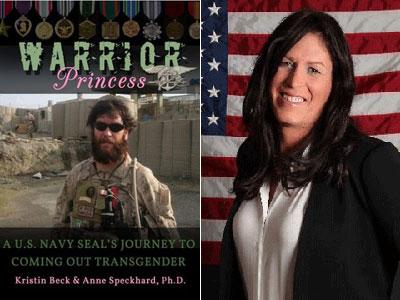 A former U.S. Navy Seal is speaking out about her transition to a woman in a new biography published over the weekend called Warrior Princess.

Beck was a member of the elite SEAL Team 6, earned a Purple Heart and a
Bronze Star, and served in the unit that killed Osama bin Laden, though
retired shortly before that raid.

In Warrior Princess, Kristin Beck discusses her two decades of military service in the elite, all-male unit, and her subsequent transition with frank honesty, describing how, over the course of 13 international deployments, she gradually came to terms with her gender identity, though she couldn’t express it during wartime.
Beck identified as a man named Chris while in the Navy, and after retiring in 2011, underwent medically necessary hormone therapy to facilitate her transition process, according to the Atlantic Wire.
Beck, who now lives in St. Petersburg, Fla., says her former colleagues were, by and large, supportive, according to an excerpt published in the Atlantic:

Soon, the responses from SEALs stationed all around the world suddenly started pouring in: “Brother, I am with you … being a SEAL is hard, this looks harder. Peace” * “I can’t say I understand the decision but I respect the courage. Peace and happiness be upon you…Jim” * ” … I just wanted to drop you a note and tell you that Kris has all the support and respect from me that Chris had … and quite possibly more. While I’m definitely surprised, I’m also in amazement at the strength you possess and the courage necessary to combat the strangers and ‘friends’ that I’m guessing have reared their ugly heads prior to and since your announcement. …”