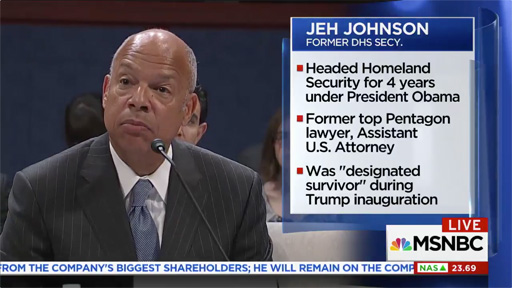 Speaking before Congress today, former Department of Homeland Security Secretary Jeh Johnson left no doubts regarding Russia’s hacking of the Democratic National Committee and interference that was meant to disrupt the 2016 presidential election.

“The Russian government, at the direction of Vladimir Putin himself, orchestrated cyber attacks on our nation for the purpose of influence our election,” he said. “That is a fact, plain and simple.”

President Donald Trump has regularly hedged in public when asked if he believes Russia interfered in the 2016 election. White House Press Secretary Sean Spicer on Tuesday claimed that he had not spoke with the president about his views on Russia’s role in disrupting the election, and would not confirm if Trump actually believed Russia was behind the hacks of the DNC and former Clinton campaign chairman John Podesta.

Ex-DHS Sec.: Russians, at the direction of Putin himself, cyberattacked the US to influence 2016 election. “That is a fact. Plain & simple.” pic.twitter.com/ZayDreTnT3