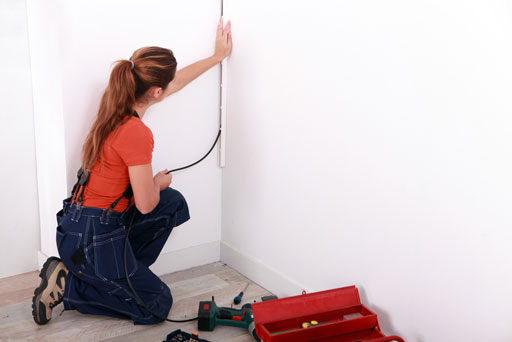 From a personal essay by Lauren Hough for HuffPost chronicling the kinds of folks she encountered over ten years on the job doing TV cable repair.

The one that comes to mind now is the anti-gay lobbyist whose office was lined with framed appreciation from Focus on the Family, and pictures with Pat Buchanan and Jerry Falwell, but whose son’s room was painted pink and littered with Barbies.

The hypocrite’s son said he was still a boy. He just thought his sundress was really cute. I agreed, told him I love daisies, and he beamed.

His father thanked me, and I wanted to tell him to go fuck himself. How the fuck do you actively work to ensure the world’s a more dangerous place for your beautiful little kid?

But I didn’t ask him that. I just stood and glared at him until he looked away. I needed the job.

I assumed his kid would grow up to hate him.

Hough also notes, through her adventures, that conservatives tended to treat her like a servant, while blue collar and sex worker customers were more polite and likely to tip after she would complete repairs.

She also shares a story about the wife of a Fox News junkie who insisted on calling her “Larry,” mistaking her for a man since she is actually a six foot tall military veteran who’s also a lesbian.

After telling the Foxer it would be 7-10 days to get his cable TV back up to speed, the wife (who had spent the entire visit cleaning the already clean kitchen counter) came out to Hough’s van to apologize for her husband.

I said, “It’s fine.” I said there really wasn’t anything I could do. She blinked back the flood of tears she’d been holding since God knows when. She said, “It’s just, when he has Fox, he has Obama to hate. If he doesn’t have that …” She kept looking over her shoulder. She was terrified of him. “I’m sorry,” she said. “I just need him to have Fox.” I got out of my van.