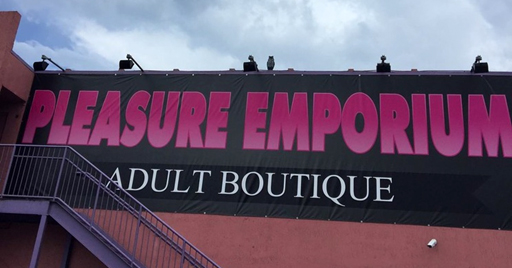 Last week, police in Hollywood, Florida, raided an adult book store and arrested 13 men who were having consensual sex in a private back room.

In the aftermath of the arrests, news outlets reported on the incident revealing the names, ages and mugshots of the men to the public.

From The Miami New Times:

Abbie Cuellar, a lawyer for one of the 13 men, told New Times her client has already been fired from his job in the medical field after his arrest at Pleasure Emporium.

Even worse, her client fled Cuba 20 years ago after being persecuted there for being gay. Since moving to the States, he had not come out to his co-workers. Cueller said the arrest — and the local media’s lurid coverage — outed her client and has pushed him into depression. New Times is not naming Cuellar’s client because of the harm the arrest has already done.

“He was persecuted in Cuba because of his sexuality,” Cuellar says. “He was thrown out of his home and thrown out of school because he was gay. He fled as a result and thought America was going to be this beacon of ‘freedom.’ He now basically has lost everything he has worked for… He is horribly suicidal.”

In a statement, a Hollywood police spokesman defended last week’s raid, calling the locked, private rooms that you have to pay to get into at Pleasure Emporium a “public space.”

As LGBTQNation points out, “indecent exposure in Florida has to occur in a public place or somewhere that can be viewed from a public place.”

Anyone who drives all the way to the Pleasure Emporium, enters the adult bookstore, and purchases a $25 ticket for the backroom could hardly be “worried” that other people would have sex around them.

“Clearly, this was a private setting within a private setting — you would have to pay to get into it,” Cuellar says. “It’s not in a residential neighborhood. There’s no danger a kid would ever walk past, even. The fact that they’ve been made out to be these sexual deviants, I feel like I’m back in the 1960s! I don’t understand the point of this arrest other than smearing and humiliating these men.”