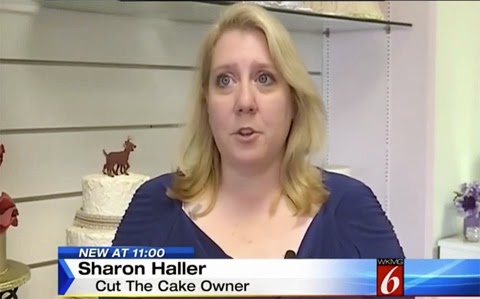 Anti-gay Pastor Joshua Feuerstein decided to see if he could get an LGBT-friendly bakery (who advertised that they were LGBT-friendly) to make a cake with an anti-gay message: “We Do Not Support Gay Marriage.”

Feuerstein, recording on video, called Cut The Cake Bakery in Florida and proceeded to order his “hate cake.” The bakery owner who answered the phone denied the request, and hung up.

This is where it gets ugly.

Feuerstein encouraged viewers to call the bakery and and help “expose the hypocrisy” they’re supposedly engaging in. Well, in a parallel of what happened to Memories Pizza in Indiana, Cut the Cake ended up receiving quite a lot of angry messages, including death threats.

Sharon Haller, who Feuerstein spoke to on the phone, said, “We started getting some hundreds of phone calls and making very nasty and negative gestures towards our business, towards us.”

Feuerstein took down the video at their request, but Cut the Cake posted it online so people could see it, along with a GoFundMe page that has raised, as of this posting, over $2000.

First of all, Florida has clear laws about recording phone calls. All parties have to be informed the call is being “intercepted” or recorded. Feuerstein did not inform the woman on the other end of the line. So, Feuerstein gets in some serious trouble here. The recording would be inadmissible in court since it was illegally done.

Second, there is a difference between making a cake for a loving celebration and making a cake with negative hate speech. And we all know it.

Third, the woman on the phone didn’t deny his order based on “religious beliefs.” She said she wouldn’t make it, and hung up. If she denies all “hate speech” cake orders, then she isn’t discriminating.

And now the baker is getting DEATH THREATS for not baking a hate speech cake? Seriously?

This is just a stunt. Plain and simple. Colorado just ruled a bakery there was not guilty of anything by denying a similarly negative messaged cake.