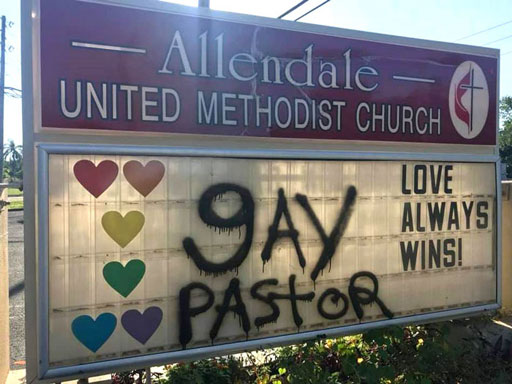 A church in Florida responded to homophobic vandalism with its own message of love.

Over the weekend, the Allendale United Methodist Church in St. Petersburg, Florida, found the words “gay pastor” spray-painted across the church’s sign.

But, instead of immediately removing the graffiti, Rev. Andy Oliver decided to leave the spray paint surrounded by a rainbow of hearts (in a nod to the LGBTQ community) and the phrase, “LOVE ALWAYS WINS!”

“This is just one example of the type of hate crime and hate message the LGBT community goes through regularly,” Oliver told The Tampa Bay Times. “It certainly isn’t great our sign got vandalized, but we want to surround that message of hate with a message of love, and that’s what we’ve received since.”

Additionally, Oliver posted on the opposite side of the church sign the statement, “Vandalism is a felony that shouldn’t take away your vote for life! Vote yes on Amendment 4.”

Folks in the Sunshine state will soon vote on Amendment 4 which would restore voting rights to most felons after serving their time in prison.

In July, a brick was thrown through the sign after a quote by civil rights leader Congressman John Lewis had been posted. That damage was significant enough that funds had to be raised to purchase a new sign set to be installed next month.

According to a St. Petersburg Police Department spokesperson, the authorities are investigating the vandalism.

St. Petersburg Mayor Rick Kriseman chimed in via his Facebook account writing, “Amen, Allendale UMC – St. Petersburg. And this shows that we still have work to do, and why we fight every single day to create a climate of inclusion.”