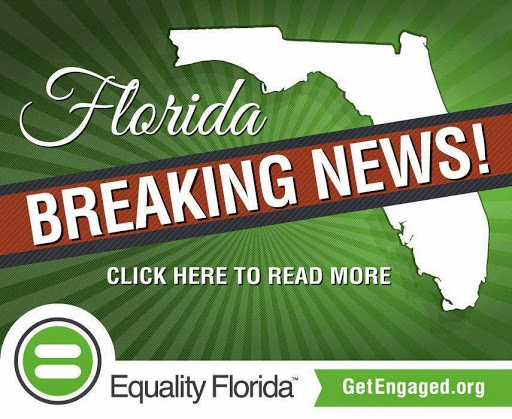 Much legal posturing and obfuscation has been directed to the expiration of a stay on the ruling by U.S. District Judge Hinkle which struck down Florida’s ban on same-sex marriage earlier this year.

Although the stay on the ruling ends on January 5th, a memo issued by the legal team for the state’s County Clerks threw those offices (which would be charged with issuing marriage licenses) into a state of confusion saying the ruling only affected one county, or perhaps even just the one couple who brought the lawsuit.

As such, the state’s Attorney General – Pam Bondi – asked Judge Hinkle to clarify his ruling. And he has now done so.

U.S. District Judge Robert L. Hinkle ruled New Years Day that all Florida clerks are bound by the U.S. Constitution not to enforce Florida’s gay marriage ban and that any couple seeking a license on Tuesday should receive one. “The preliminary injunction now in effect thus does not require the Clerk to issue licenses to other applicants,” Hinkle wrote in an order released Thursday afternoon. “But as set out in the order that announced issuance of the preliminary injunction, the Constitution requires the Clerk to issue such licenses.”

Said Howard Simon, executive director of the ACLU of Florida: “He agreed with us that the constitution requires every clerk in the state issue a license. His injunction has statewide impact because he found the law unconstitutional and therefore as we have been saying, no public official should be acting in accordance with an unconstitutional provision,” Simon said. “In non-legalese: Come Tuesday, Jan. 6, every clerk has an obligation under the U.S. Constitution to issue marriage license to all couples requesting one.”

Said Howard Simon, executive director of the ACLU of Florida: “This is a New Years Day present from federal Judge Robert Hinkle — he has given Florida the roadmap to an orderly transition to being a state that treats all its people equally.”

“We are thankful that Judge Hinkle agreed with us that the Constitution does not tolerate discrimination and that, beginning Tuesday Jan. 6, all clerks in Florida have an obligation to issue marriage licenses to couples requesting them.”

That seems pretty, darn clear to me. 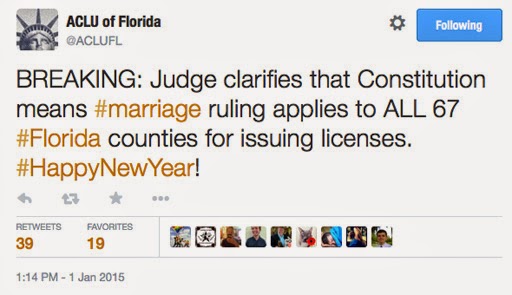