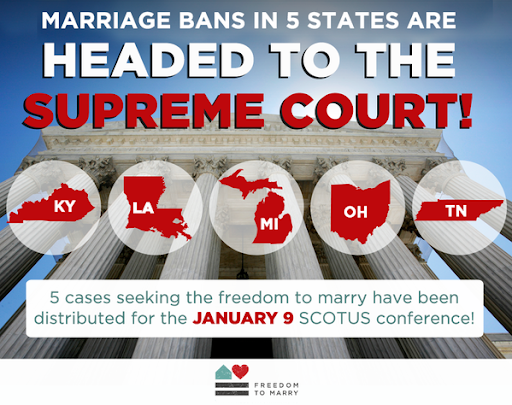 On January 9, the United States Supreme Court will consider petitions on the freedom to marry from 5 marriage states – Tennessee, Louisiana, Ohio, Michigan, and Kentucky – who are seeking certiorari this term.

The January 9 conference is the Supreme Court’s first chance to consider these five petitions seeking certiorari.

After the January 9 conference, the Court will announce if it will grant certiorari in the case, meaning it has agreed to hear oral arguments and likely offer judgment.

If the Court makes no mention of the marriage cases after the conference, the cases will likely be relisted for consideration at a future conference.

The subsequent conferences this winter will be held on January 16 and January 23.

(from Freedom To Marry)