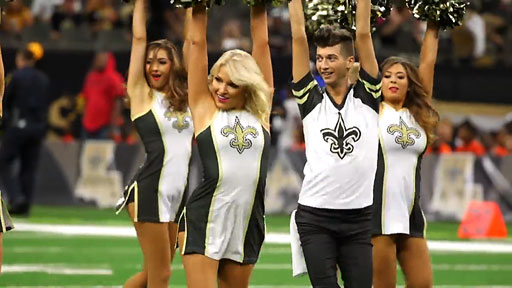 This season will mark the first time in decades that men will be joining the ranks of NFL cheerleader squads.

First to make his debut was 25-year-old Jesse Hernandez who took to the field of the Mercedes-Benz Superdome this past Friday for the New Orleans Saints preseason game against the Arizona Cardinals.

According to Nola.com, for many the historic moment came and went without fanfare although one woman interviewed in the stadium crowd offered her support saying, “If he can dance and perform, I don’t care.”

Another woman chimed in saying, “I think it’s awesome.”

Watch video of Hernandez’s debut below.

Also in the supportive category is Jesse’s mom, Tracey Hernandez, who drove hours to attend her son’s debut performance.

The New Orleans Advocate’s Ramon Antonio Vargas profiled Jesse’s mother in an interview that underscored her total support for her son.

In the interview, she also admitted that Jesse had experienced bullying and harassment for a long time going back to when he became the first male to make his high school dance team in his hometown of Maurice, La. years ago.

“Those people just need to get over it,” Mama Hernandez said. “We’re in 2018. Things shouldn’t be just for men or just for women. If you have the ability to do it, you should be able to do it.”

Some Facebook comments to the Advocate article confirmed her concerns.

From The New Orleans Advocate:

Based on the Facebook comments on Vargas’ story, Tracey Hernandez’s fears were realized. One he-man dismissed Jesse as a “gay bait prancing around like a fairy.” “That’s no man,” someone else said. Another ALL-CAPS guy said it was ‘THE NFL PUSHING THE PUSSYCRAT POLE SMOKING ETHICS,” whatever that means.

Other comments: “Homo.” “Pantywaist.” “Sick libturd bullshit.” “What male football fan wants some queer prancing around with the women?” “I’m surprised he hasn’t set off the fire alarms in the Superdome.”

None of that mattered to Hernandez, though, as he took to the field wearing black skinny jeans and a black/white t-shirt with a fleur de lis.

On a personal note, I should add that in my senior year of high school the cheerleading squad looked to add male cheerleaders, and of course, I tried out and got one of the four slots.

I loved cheering. It was fun to stand on a football field in front of sports fans yelling my head off, performing cheers and routines and getting a whole lot of teen tension worked out.

Along the way, the experience impacted my social life at school as I found myself spending lots of time with students I’d gone to school with for years but never got to know.

Many were totally open to the inclusion of men on the squad. However, one of the other GUYS was a total douche to me throughout the year. He’d call me “faggot” on the football field and took any chance he could to ridicule me.

Even though I didn’t really know who “I was” yet, it was those moments that helped me learn to cope with years of homophobia. And part of what I learned was – people learn to accept ‘new’ things far better than we think.

My years as a cheerleader (when I got to Syracuse University, I cheered for three years including being captain) taught me a lot about leadership and social interaction.

Props to Jesse Hernandez and to LA Rams cheerleaders Quinton Peron and Napoleon Jinnies, who will make their debut shortly.

In the video below, Hernandez chats about why he decided to try out for the Saintsations prior to his being cast as a new “Saintsation.”

p.s. ok, just ONE pic from my cheerleader days at Syracuse University… 🙂 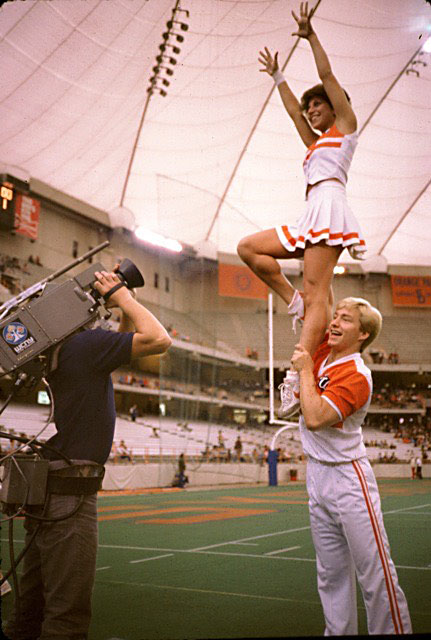