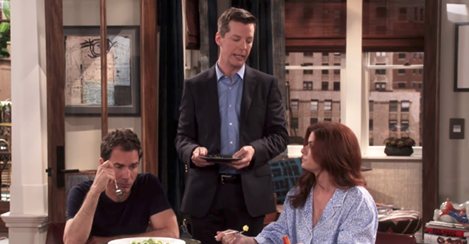 Check out the First Look sneak peek at the upcoming Will & Grace reboot premiering September 28 on NBC at 9PM.

Looks like they’ve lost none of their comedic stride: Karen jamming out to Fox News, Jack angry that Brangelina co-opted his breakup week, and Grace thinks Newt Gingrich is most likely to have “aged into a lesbian.”

As earlier reported, the reboot will ignore the original series finale which makes sense 🙂