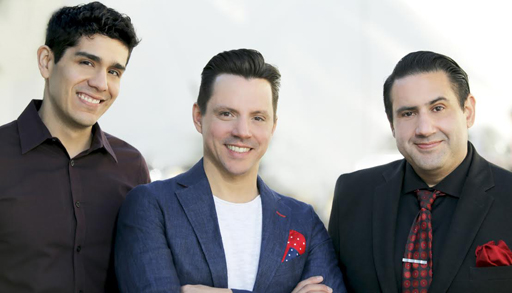 Combining experience from the worlds of radio, acting and journalism, the English-language show will offer insight into A-lister life from a decidedly queer Latino perspective.

With a festive and unique flavor, the show promises no subject will be too hot to handle and no scandal too spicy to dig into.

Produced at LATV’s state-of-the-art HD studios in Los Angeles, Glitterbomb plans to offer the latest in pop culture news and trends; insider looks at the latest celebrity hot spots and events; as well as some of the biggest names in entertainment.

“We could not be happier that LATV has given three gay Latinos a platform as big as Glitterbomb,” co-hosts Gomez, Rodriguez, and Sapene say in a joint statement. “But we hope that people of all races, genders, and orientations will see a bit of themselves in our show — or, at the very least, have a good time watching it!”

LATV is the only remaining Latino-owned TV network in the Hispanic television space. Its programming primarily targets U.S.-born Latinos and the coveted bicultural 18-49 Latino demographic, with content that features originally-produced shows in Los Angeles, as well as licensed content that has never before been seen in the U.S.

For more go to www.LATV.com.