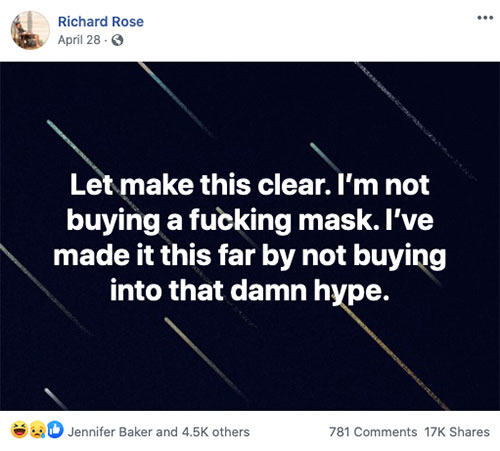 I really don’t need to comment. I’ll just let this all speak for itself.

On April 28, a Facebook user named Richard Rose in Ohio posted the above message.

On July 1, he was officially quarantined having tested positive for the coronavirus. The next day, he shared this: 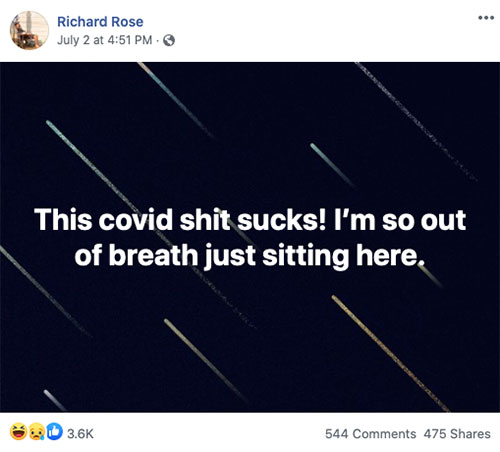 Shortly before his death from COVID-19 on July 4, this was posted on his Facebook: 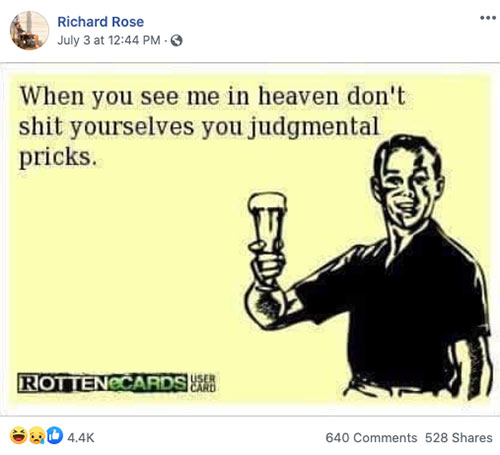 I’ll add to this the tale of a 30-year-old Texas man via The Daily Mail:

A Texas man has died after attending a “Covid party” because he thought coronavirus is a hoax, authorities said.

The man was 30 years old at the time of his death, according to Methodist Healthcare Chief Medical Officer Dr. Jane Appleby.

Appleby told news organizations that the patient, who has not been named, had attended a so-called Covid party prior to contracting coronavirus.

“This is a party held by somebody diagnosed by the Covid virus and the thought is to see if the virus is real and to see if anyone gets infected,” Appleby told News 4 San Antonio.

The man who attended the party then became critically ill.

While in the hospital, Appleby said that just before he died, he looked at his nurse and said, “I think I made a mistake, I thought this was a hoax, but it’s not.”

Appleby also told KSAT that, “He didn’t really believe. He thought the disease was a hoax. He thought he was young and he was invincible and wouldn’t get affected by the disease.”

I get no joy from sharing this. But, it’s an obvious cautionary tale to those who continue to refuse to wear a mask or even believe the COVID-19 crisis exists.