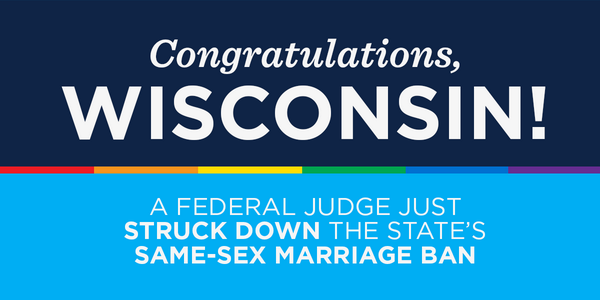 Wisconsin’s voters passed a constitutional ban against same-sex marriages in 2006, but the American Civil Liberties Union, the ACLU of Wisconsin, and the law firm of Mayer Brown filed a lawsuit on behalf of eight Wisconsin couples challenging the ban.

“It is DECLARED that art. XIII, § 13 of the Wisconsin Constitution violates plaintiffs’ fundamental right to marry and their right to equal protection of laws under the Fourteenth Amendment to the United States Constiution.”

“Personal beliefs, anxiety about change and discomfort about an unfamiliar way of life must give way to a respect for the constitutional rights of individuals…”

The state motioned to stay the case in March and to dismiss it in April, but both motions were denied. It’s not yet clear when same-sex marriages will be able to be performed in Wisconsin.

Several county clerks have prepared for this decision in advance with plans to beef up staff in case there is a sudden rush for couples to marry.  There is normally a five day waiting period between application and issuance of marriage licenses, but clerks may waive the waiting period in some cases for a $25 fee.  Some clerks have indicated they would be willing to do so for same-sex couples.

This is the 20th consecutive win for marriage equality since last summer’s SCOTUS decision on DOMA and Prop 8.

What a gift for pride celebrations!