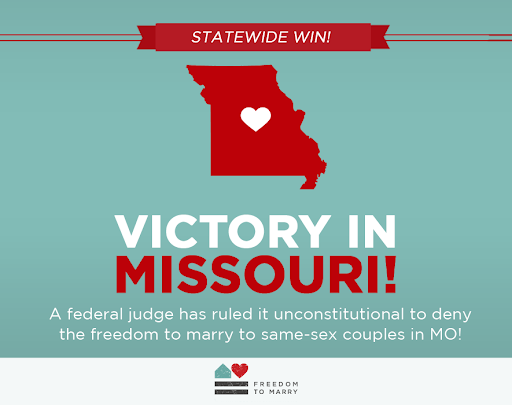 One day after the 6th Circuit Court of Appeals upheld anti-gay marriage laws in Ohio, Michigan, Kentucky and Tennessee, a federal judge in Missouri has ruled the same-sex marriage ban in that state is unconstitutional.

The state of Missouri could appeal the decision to the U.S. Court of Appeals for the 8th Circuit – but the Attorney General and Governor, who support the freedom to marry, could also allow the ruling to stand. Stay tuned.

You can read the full ruling here.

UPDATE: Missouri Attorney General issued a statement saying the ruling will be appealed to the 8th Circuit Court of Appeals.