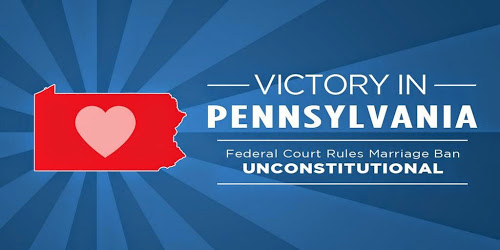 “Hoping to end this injustice, eleven courageous lesbian and gay couples, one widow, and two teenage children of one of the aforesaid couples have come together as plaintiffs and asked this Court to declare that all Pennsylvanians have the right to marry the person of their choice and consequently, that the Commonwealth’s laws to the contrary are unconstitutional.

“We now join the twelve federal district courts across the country which, when confronted with these inequities in their own states, have concluded that all couples deserve equal dignity in the realm of civil marriage.”

Attorney General Kathleen Kane, who refused to defend the law saying it was unconstitutional, issued this statement: “This is an historic day. More importantly, today brings justice to Pennsylvanians who have suffered from unequal protection under the law because of their sexual orientation. When state-sponsored inequality exists, citizens are deprived of the full protections that the Constitution guarantees. Our Commonwealth progressed today and so have the hopes and dreams of many who suffer from inequality. Today, in Pennsylvania, the Constitution prevailed.”

A May 2013 poll found 54 percent of Pennsylvanians support marriage equality.

You can read the entire ruling below from Judge John Jones: