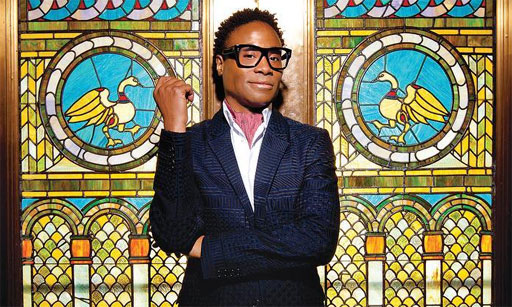 As we’re enjoying season 2 of the acclaimed FX series POSE, I see many on social media living for the musical performances on the show, especially by Tony Award winner Billy Porter as ‘Pray Tell.’

But some may not realize how extensive Porter’s recording career is.

After winning the television talent show Star Search back in 1992 (while performing on Broadway), Porter began making his mark in the recording studio.

One of his most well-known pop music tracks (even if folks didn’t know it was the future Golden Globe/Emmy Award nominee) was “Love Is On The Way,” the lead single from the soundtrack of the 1996 Bette Midler / Goldie Hawn / Diane Keaton film, The First Wives Club.

Porter also had a #1 hit on the Billboard AC chart collaborating with pianist Jim Brickman and Jordan Hill on the title track to Brickman’s 1999 album, Destiny.

Porter’s own albums offer his own distinct musical style which combines R&B, pop, and soul.

His latest single, “Love Yourself,” an upbeat paean to looking to ourselves first for approval.

The song “Time,” from his spectacular live one-man show, At the Corner of Broadway + Soul, was written by Porter and grabbed national attention when it was featured on the reality dance competition, So You Think You Can Dance.

He also recently teamed up with his longtime friend, two-time OutMusic Award winner Matt Zarley, on a cover of the 1994 Des’ree hit, “You Gotta Be.” Again, the theme of self-love and empowerment weaves its way through the Porter catalog. Note – all proceeds of the new recording go to the Los Angeles LGBT Center.

And Porter has also returned to his Broadway roots bringing his unique musical sensibilities to two studio albums – the 2014 Billy’s Back on Broadway, and his 2017 release, Billy Porter Presents: The Soul of Richard Rodgers.