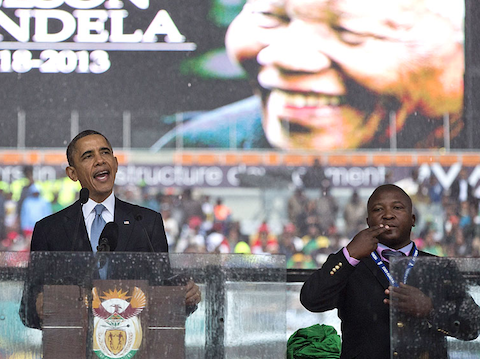 The man who stood next to President Obama and other world leaders and faked sign language during Tuesday’s memorial for Nelson Mandela says he suffers from schizophrenia and had an attack that caused him to hear voices and hallucinate on stage.

The man, identified as Thamsanqa Jantjie, 34, claims he is a real interpreter but that a schizophrenic episode caused him to lose concentration and start making meaningless signs, reports South Africa’s Star newspaper.

“There was nothing I could do,” Jantjie tells the paper. “I was alone in a very dangerous situation. I tried to control myself and not show the world what was going on. I am very sorry, it’s the situation I found myself in.”

He added: “Life is unfair. This illness is unfair. Anyone who doesn’t understand this illness will think that I’m just making this up.”