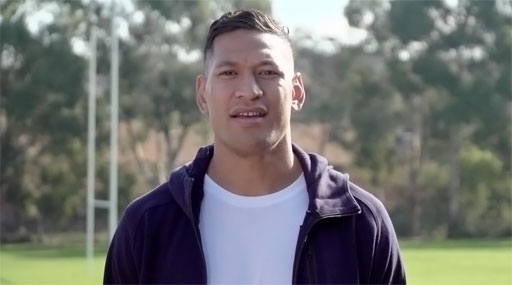 Yesterday, I reported on homophobic Australian rugby player Israel Folau, whose hateful, anti-LGBTQ social media posts resulted in his being stripped of his multi-million dollar contract with Rugby Australia.

But GoFundMe shut down the campaign citing terms of service violations and writing in a statement that, “We do not tolerate the promotion of discrimination or exclusion.”

Enter the Australian Christian Lobby (ACL), a Christian extremist political lobbying group, who have now set up a new fundraiser on its website with the same goal of $3 million on Folau’s behalf, kicking in the first $100,000 themselves.

View this post on Instagram
Those that are living in Sin will end up in Hell unless you repent. Jesus Christ loves you and is giving you time to turn away from your sin and come to him. _______________ Now the works of the flesh are manifest, which are these , adultery, fornication, uncleanness, lasciviousness, idolatry, witchcraft, hatred, variance, emulations, wrath, strife, seditions, heresies, envyings, murders, drunkenness, revelings, and such like: of the which I tell you before, as I have also told you in time past, that they which do such things shall not inherit the kingdom of God.
Galatians 5:19‭-‬21 KJV _______________ Then Peter said unto them, Repent, and be baptized every one of you in the name of Jesus Christ for the remission of sins, and ye shall receive the gift of the Holy Ghost.
Acts 2:38 KJV _______________ And the times of this ignorance God winked at; but now commandeth all men every where to repent:
Acts 17:30 KJV _______________
A post shared by Israel Folau (@izzyfolau) on Apr 10, 2019 at 1:18am PDT

As of this writing, ACL has banked over $1.5 million in just a day.

“There is an outpouring of support for Israel Folau from the Australian community, who see Israel’s case as their case,” said ACL managing director, Martyn Iles. “They feel the pinch of political correctness, and the erosion of their basic freedoms.”

“Folau’s supporters will only be emboldened in their commitment by what has happened,” adds Iles. “They were concerned about their freedoms, and GoFundMe has yet again reminded them that their concerns are real.”

“Israel’s case is our case if we want to live free and embrace our beliefs without fear of being marginalized or discriminated against.”

According to ACL, the new funds will be deposited in a trust for Folau to use only for legal expenses.

As I previously reported, TheAustralian.com says the 30-year-old rugby player is nowhere near the poor house as he owns seven homes located in and around Sydney reported to be worth over $5 million, and drives a $500,000 Lamborghini.

Why does he need his fans to pay his legal fees?
#suckers