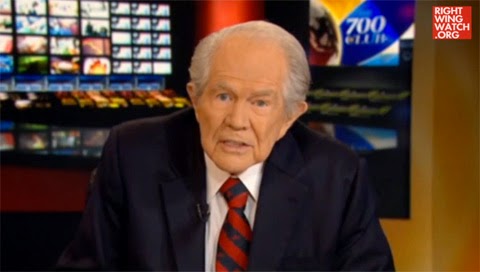 Well, hell must have frozen over because for once Pat Robertson is speaking with clarity about the shenanigans Sen. Ted Cruz pulled this past weekend regarding the Senate passing the CRomnibus bill to keep the government running.

Normally a bill has to “ripen” for several hours giving Senators a chance to read and digest what they are going to be voting on. But that waiting period can be waived if all 100 Senators agree. This would have allowed a faster vote on the already approved House bill. But Ted Cruz threw a wrench in the works voting against waiving the period because he wanted to have a vote on the Senate floor denouncing President Obama’s executive order on immigration.

This opened a procedural door that allowed outgoing Senate Majority Leader Harry Reid and the Democrats the chance to pass over 20 nominations from the President that the Republicans have blocked for months.

One of those nominations that finally got passed after a year and a half hold was Vivek Murthy, a Harvard and Yale-educated doctor, whose nomination for Surgeon General had been on blocked based in great part by opposition from the gun lobby. Thanks to Cruz, he was approved by Senators 51 to 43 to confirm.

Christmas came early for the Dems thanks to the rookie move by Sen. Cruz.

And even Pat Robertson can see it.