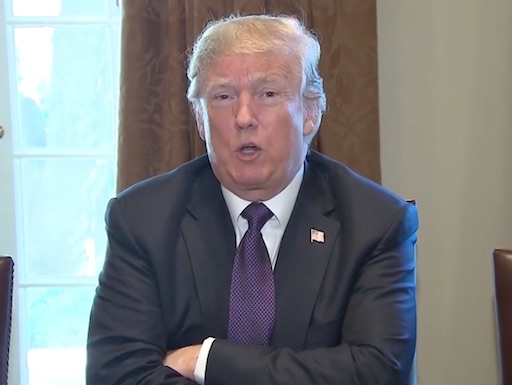 In an article for Esquire, writer Charles P. Pierce comes to the conclusion that Donald Trump is quite possibly in “severe cognitive decline, if not the early stages of outright dementia.”

You may recall that our current president is the oldest American president to take the office and that his father developed Alzheimer’s in the 1980s.

When you couple those facts with his spur of the moment Twitter rants and his terrible use of sentence structure/syntax when he struggles to explain himself, it’s not far-fetched to imagine.

In this interview, the president* is only intermittently coherent. He talks in semi-sentences and is always groping for something that sounds familiar, even if it makes no sense whatsoever and even if it blatantly contradicts something he said two minutes earlier. To my ears, anyway, this is more than the president*’s well-known allergy to the truth. This is a classic coping mechanism employed when language skills are coming apart. (My father used to give a thumbs up when someone asked him a question. That was one of the strategies he used to make sense of a world that was becoming quite foreign to him.) My guess? That’s part of the reason why it’s always “the failing New York Times,” and his 2016 opponent is “Crooked Hillary.”

In addition, the president* exhibits the kind of stubbornness you see in patients when you try to relieve them of their car keys–or, as one social worker in rural North Carolina told me, their shotguns. For example, a discussion on health-care goes completely off the rails when the president* suddenly recalls that there is a widely held opinion that he knows very little about the issues confronting the nation.