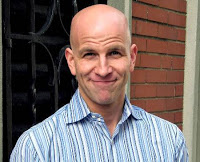 After years of reading news at WCBS 880 AM, Jared Max made at some at ESPN Radio this morning.

Two weeks into his new gig as early-morning host at 1050 AM, Max announced he was gay at the close of Thursday’s show.

“Are we ready to get our sports information from someone who is gay?” Max said. “Well, we are about to find out. For the last 16 years, I’ve been living a free life among my close friends and family and I’ve hidden behind what is a gargantuan-sized secret here in the sports’ world.

Max led up to the revelation by talking about Suns executive Rick Welts and former Villanova basketball star Will Sheridan, both of whom have come out of the closet this week. Max would later thank Charles Barkley, who said he has played with gay men in his NBA career and did not see any problem with it.

But Max said he believes that not just any current player can come out and say he’s gay.

“It would have to be a player of superstar status, not just a star, but a superstar to sway the momentum,” Max, 37, said. “Truth is, the world I grew up in and you did, was not ready for this. But today’s kids — my friends who have children — have told me it’s a different world now. … Truth is, why should we cater to the bigots and the uneducated folks, it’s 2011?”

Max said this would be the only time the subject of his sexuality would come up on his show. He feared that admitting he was gay would have kept him from a career in sports broadcasting.
(via NYPost)